The following is based on the traditional historicist view of Bible prophecy.

Since the fall of the Papal States (old world order) the Vatican's New World Order (NWO) has been ruling the eighth and final head of the Roman empire (Rev.17). 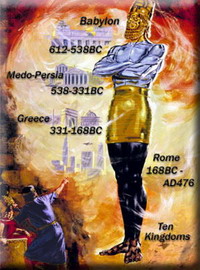 In Daniel chapter 2 the king of Babylon was given a dream that he could not understand (or even remember). God showed Daniel the meaning of the dream.


The dream was of a statue of a metal man that symbolized four empires that would rule until the end of the world. They were: Babylon, Medo-Persia, Greece, and Roman empires. Subsequent chapters (7 & 8) are additional visions that give more detail about the four kingdoms (empires).


Chapter 8 identifies the Medo-Persian and the Greek empires by name (v.20, 21). Chapter 7 gives many details to identify the Roman Empire including its fall and transformation into the Holy Roman Empire.


Scholars and critics would attack the dating of the book of Daniel. However, after the discovery of the Dead Sea Scrolls with portions of Daniel in an ancient Hebrew script no longer in use the critics have had to recant.[1][2] The book of Daniel was written while Daniel and the Jews were captive in Babylon long before the Roman Empire or Church ever existed.

The king's vision ends with a stone smashing the statue, representing Jesus (Mark 12:10) at the Second Coming - before He had came the first time! 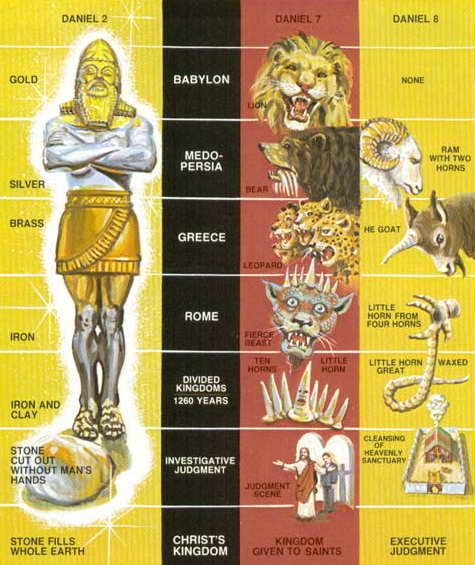 The Ten Toes of the New World Order


The iron Roman empire has two legs: east and west. The two feet are of clay and iron. Notice the 'ten toes' on both feet.

Daniel 2:41 And whereas you saw the feet and toes, part of potters' clay, and part of iron, the kingdom shall be divided; but there shall be in it of the strength of the iron, for as much as you saw the iron mixed with miry clay. 42 And as the toes of the feet were part of iron, and part of clay, so the kingdom shall be partly strong, and partly broken. 43 And whereas you saw iron mixed with miry clay, they shall mingle themselves with the seed of men: but they shall not join one to another, even as iron is not mixed with clay. 44 And in the days of these kings shall the God of heaven set up a kingdom, which shall never be destroyed:

The 'ten kings' of Rev 17 rule with the 'beast from the bottomless pit'. This Pit Beast can be identified as the Vatican's NWO that arose to power at the time of the French Revolution (see Rev 11), the eighth and final head of the Roman empire (Rev 17). 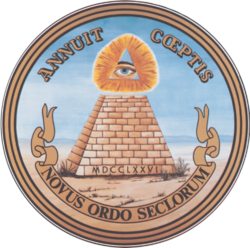 
Founded in 1776, the first biblically significant act of the Vatican's NWO was to give the empire the 'wound' in 1798 (after the 42 months, Rev 11 & 13). Napoleon (Freemason) had the Pope arrested and seized the Papal States. In 1814 the Papal States were restored briefly before being dissolved in 1870. The Vatican's NWO has since went about replacing the holy roman empire's monarchies with secular republics as the eighth and final head of the Roman empire (Rev 17).

The Freemasons were founded by the Knights 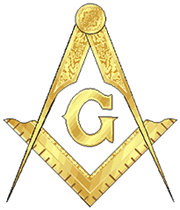 
Also interesting, Mackey notes, before taking the name Freemason, while the Templars were suppressed, they went under the name Emperors of the East and West, as the Knights Templar were tasked with healing the schism by ruling kingdoms within the eastern and western empires.


The Jesuits and Freemasonry share a common origins: the Knights Templar. As Templar Knights Freemasons answer by chain-of-command to the Jesuit General. Low level Freemasons are recruited from all walks of life.


The Vatican's NWO is the final head of the Roman empire. The 'wound' to the 7th head or Papal States was in 1798 as the NWO 8th head took over, then dissolving the Papal States in 1870, by the 'fire' of revolution (video).

As the Papal States were dissolved "Babylon fell"; the Catholic Holy Roman Empire was officially dead. The Vatican no longer forces Roman Catholicism on the world, however still rules politically.

The once great holy roman empire with all the wealth and power is today relegated to a Church alone, not seen as a political power (Revelation 17:1 through 19:10). At times the Church seems to have political power but this is the NWO not the Holy Roman Empire.

The wound was to the seventh head as the eighth and final head took over following the '42 months'. The 'wound' is not going to 'heal' to become another religious persecuting power as many look for. The Vatican's New World Order has political bodies in New York, Washington and London. Having founded the United Nations after WW II the secular founding principle of separation of the church and state for which they fought many irreligious revolutions goes contrary to a revived Church-state.